Happy World Oceans Day! Today marks the annual celebration of our blue planet as we work towards a cleaner, more sustainable future. Three quarters of Earth’s surface is covered by oceans, containing 97 percent of the Earth’s water that over three billion people depend on for their livelihoods. Oceans are the life source of Earth, connecting people across the world, regulating climate, producing 80% of our oxygen (trees generate 20%), providing a home for wildlife, and feeding millions of people. This year’s theme “Healthy Oceans, Healthy Planet” promotes the prevention of plastic polluting our oceans.

Plastic pollution poses a significant threat to oceans and marine life because it degrades very slowly and remains in waterways for years.  Plastic is often ingested by aquatic animals that mistake it for food, which poses serious health consequences for these critters and for humans.  Kilometers of discarded fishing net and plastic debris snare and drown thousands of sea creatures per year, and countless dead birds have been found with plastic in their stomachs.  The National Oceanographic and Atmospheric Administration (NOAA) determined that 100,000 marine mammals and millions of birds and fish have been killed by plastic debris each year.  NOAA also reported that 8 million tons of plastics are dumped in oceans each year – the shocking equivalent to five grocery bags filled with plastic for every foot of coastline in the world.  This figure is anticipated to double by 2025.  Our oceans, plants, and wildlife are choking on plastic.

Morocco boasts the pristine Atlantic and Mediterranean coast. The last session of Dar Si Hmad’s Water School was devoted to teaching the children about “Aquatic Ecosystems”.  The children learned about the animals and plants around the Atlantic Ocean and the Mediterranean Sea hugging Morocco’s coastlines by creating their own “ocean” with blue jello and gummy fish.  The shock on the students’ faces when shown pictures of water pollution in Morocco’s water systems and harrowing scenes of dead sea animals ensnared in plastic nets led them to make posters on how important it is to prevent pollution, which they hung proudly around the classroom.  In previous years, Dar Si Hmad took the Water School students on a trip to Lexira Beach, an hour away from their villages in Ait Baamrane.  For many children, this was the first time they had seen the ocean.

For World Water Day on March 22, Dar Si Hmad asked RISE participants to submit photography, written pieces, or art on what water means to them.  Mohammed Ouabbou, a recent RISE Graduate and newly named Environmental Youth Ambassador, captured the water pollution around his community in Agadir in photos - and wrote an impassioned statement about the importance of communities fighting pollution together.

Across the world, mankind is threatened by several dangers. Pollution is at the top of this danger. The images below taken at the source of the Oued Souss River show a perfect example of pollution. It exposes dirty surfaces and water spots contaminated not only by sewage water from factories but also sewage water from homes that often contain toxic substances, such as hydrochloric acid, bleach and detergent. In addition to these materials, plastic bags are thrown into toilettes and nature. Since these products are not biodegradable, it will not degrade for another several centuries.
The consequences of this form of pollution are numerous and disastrous. For example, the chemical products that fill the river have led to the disappearance of several animal species like birds and fishes, the former of which fishermen plant themselves in their bad quality in fishing spots close to the source of the river.  Despite this, pollution is not an inevitable destiny. There are solutions to end this catastrophe. Companies, schools, the Internet and different mass media outlets play an important role in raising awareness citizens and industries, and another role in pressuring the government to end the laws that prohibit and prevent having such behaviors mentioned above. Lastly, the fight against pollution is impossible if one does not have the will to do so.

No one can deny the importance of water being a fundamental condition for all living beings on this planet. However, several aspects of pollution and waste return to the irrationality of its usage that permanently threaten the lives of millions of beings.
The design attempts to put on the same scene the fundamental place occupied by water (the drop of water that all the planet carries on its shoulders) and the crisis affecting water resources, provoked by pollution factors shown on the drawing by ‘the greenhouse effect.’ In addition, the cartoon attempts to shed light on the suffering of the drop of water that can no longer support the heaviness of the burden especially after sustained a significant ‘weight loss’ (waste).

The Environmental Youth Ambassadors will be organizing events that gather their community to care for their environment and to create solutions to pressing issues like ocean pollution. Stay tuned for EYA activities leading up to Morocco's hosting COP22 climate change negotiations in November on the EYA blog.


Oceans - their currents, their temperatures, their chemistry, and wildlife - make Earth habitable for humans. It is absolutely imperative that we take responsibility for caring for our oceans like they care for us. To survive and thrive, we must unite to mobilize toward the sustainable management of our world’s oceans. Our team at Dar Si Hmad, the Water School, RISE, and the Environmental Youth Ambassadors wish you a Happy World Oceans Day! 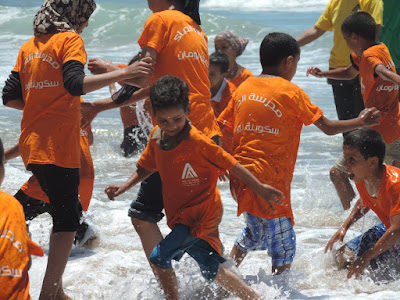