The last week of February was an unforgettable experience for our guests visiting from Lewis & Clark college located in Portland, Oregon, USA.
The 18 american university students and their professor had the opportunity to explore a beautiful side of Morocco. More precisely, the region of Ait Baamrane and the city of Sidi Ifni, which is famous for its rich culture and deep history. 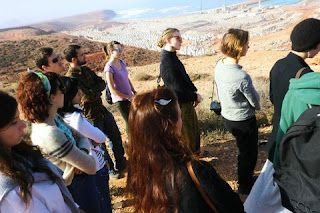 The students learned more about the region’s culture and history, through a historical tour and Q&A sessions, that were animated by Dr. Jamila Bargach, who worked on the region of Sidi Ifni for many years. Jamila talked about Sidi Ifni during its pre and post-colonial era, showing the students the city’s historical sites and talking about its current situation.

On their third day in Sidi Ifni, The students visited to the countryside, which is known for its calm and friendly nature, along with its hospitable and generous people. They had a traditional breakfast in a local village, then headed up to the peak of Mount. Boutmezguida, which is 1225 km a.s.l, to discover the fog-collection project that was initiated by Dar Si Hmad, in order to provide the local villages and schools with drinking water since they spend an average of 3.5 hours per person per day for fetching water. 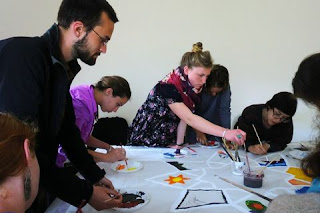 The students also had the opportunity to attend a presentation regarding Modern visual arts in Morocco, during which they explored the Moroccan painting art before and after its colonization, then they participated actively in both a calligraphy and a painting workshop, during which they deployed their talent and imagination to come up with transcendent paintings .
A Goodbye dinner party was scheduled on the fourth day of the visit, and a Sahrawi band performed traditional music that made the audience dance and feel the region’s charm.
Thanks to this cultural and boundary-breaking program, we were proud to break all barriers segregating us from our american guests.