From the Logbook: Employees of DSH Tell their Stories/ Soufian Aaraichi, Project Manager

Within and beyond languages 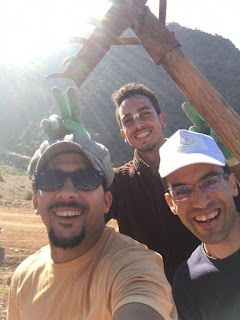 An intercultural team can be of great advantage when it comes to solving complex problems, as different points of view are coming together. At the same time, cultural diversity comes along with some challenges. We often underestimate the cultural implications to achieve such cooperation.
Working with an anthropologist and my first female director, always motivated to recruit collaborators of different cultures together and work as one team, is like handing a set of watercolors to a sketch artist who has always worked with charcoal. Amazigh, Arab, French, American and other cultures opened a whole new range of possibilities and boosts our creativity to decision making and problem solving. However, the applied language appears to be a further problem in communication during our meetings and internal/external communication as we always need intermediator with mono-langual colleagues. While almost 60 percent of the work we do is in English (with some mixing here and there), the language abilities vary greatly. 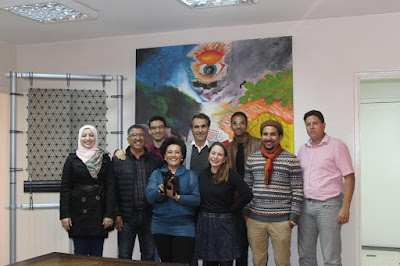 As project manager/coordinator, I have found myself developing my communication skills and language without realizing in it, swinging with four languages a day. The consequences are often misinterpretations and misunderstandings. It is frustrating and sometimes causes tention! I learn to overcome this challenge by recognising and appreciating the differences and similarities and learning how to deal with them.

I do appreciate to be exposed to intercultural team at Dar Si Hmad and I have experienced how it can be of great advantage. Every culture is unique so there are differences between every single culture. But instead of complaining about these differences, such creative diversity is embraced and integrated into our work concept. By doing this many problems can simply be overcome. 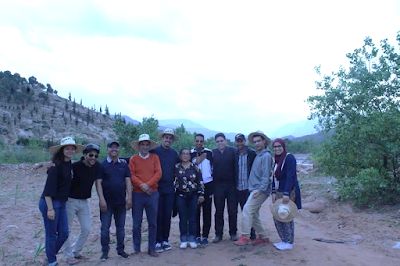 Learning the tools of the Trade 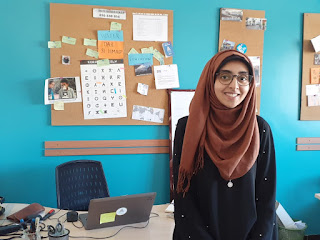 It’s been only two months that I am the communication officer of Dar Si Hmad and yet, I have already had to face many challenges. When I first started in the organization, I was so eager to learn,  to improve and to put to  practice all the communicational skills I had recently acquired through the many courses I completed whether online or at the university, but the priority is that I had to work with a PhD candidate, a CELAR student needing assistance for the research she was conducting here in Morocco.

Though the large umbrella of this research was on climate change and water scarcity in the rural Southwest region of Morocco, her specific questions focused primarily on how this climate change impacts the health and lives of underserved marginalized women within these areas of the country. This is a new field of research, still emerging and research is being conducted in different disciplines. The challenge was basically a linguistic one, most of the published material being either in French  or in Arabic and not in English; this is where my role came in.

I am a native speaker of Arabic and French languages, and my role was to assist her in completing a literature review, and finding what is emerging as the most important topics within the field; this task was surely stimulating but also very demanding for me. I felt I had to shoulder the new responsibility but I also was apprehensive that my work would not meet the demand and expectation of the researcher. Documents, both in French and Arabic are easily available, but providing a faithful and accurate translation for their content is where the challenge lay. Working on one single article of some 7 pages would generally take 3 days of intense work to find out the accurate and nuanced translation of the jargon it contained and its general message; we were meeting daily for the entire month of July. This task demanded rigor and discipline and even when stressful at times, it proved to be also one that benefited me greatly and widened my knowledge horizon.

Now and following the completion of this demanding task, I can focus on the communication matters and the future RISE project I am designing with the team’s help. The days spent in the organization go by very fast to the extent I did not  realize the start of the new academic year. as I am now pursuing my Masters’ Degree at Ibn Zohr university. I am full of emotions, happy, excited, fearful, but always hopeful.

From The Logbook: Employees of DSH Tell their Stories/ Mounir Abbar, Fog-Harvesting Manager 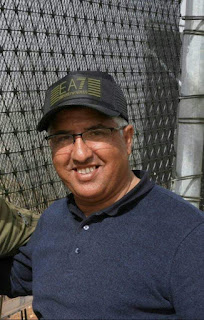 All the village residents were out, finally the last steps to fully installing and connecting their houses to the water were to be completed within few hours. They had bought and brought the meters as per our agreement. They have been more than patients, it has taken us years to come to this point. From getting all the necessary clearance, securing all the funds, but especially from getting all the heavy machinery to work in such a harsh environment. Hard rocks, rough mountain sides, are a nightmare for digging. It has taken us more than 3 months to complete the entire process  of preparing the passage for the pipes, laying the pipes, covering them and having them connected. The distance is a simple 3000 linear meters.
Each day comes with the promise that this will be completed, but something unexpected happens, the machine breaks down, the imponderables of working with equipment that is old in a very demanding environment. A missing piece or tool that halts the work and we have to take a long trip to town to see if we find it, by the time we return, the workers have left. Actually, this worker leaving for good was a positive step, he was sarcastic all the time and still doubting that there was any fog-water to be collected. Incredulous, he refused to believe that this was actually happening and that the water had transformed the lives of the communities with access to it.  That he was replaced by a family-member of one of the beneficiary-villages, was in itself a success; this man brought force and commitment to his work.
So this last village, everyone is out and they are witnessing just the last step, like the cutting of a ribbon to celebrate the promise of something new.  One of the residents and his family were, however, not among the celebrating group; their house was at the farthest point of the village and they were, in all effect, marginalized because they were considered to be the poorest of the village. The father being blind, the two daughters and an aging mother fared however much they could in these dire conditions. While the rest of the village was ready to welcome flowing water after they had installed their newly bought meters, this family had no meter and no way of purchasing one. They were occupying all the margins of this village. I could not stand such injustice and that they did not share the joy of welcoming finally water in their household as the rest did. This situation warrants to take different decisions and while respecting the agreements between the NGO and the Beneficiaries, this time I myself stopped the work, and left to town. I bought a new meter and came back the next day to launch the work from the house of the poor, blind man… From being at the margin, he became for me, the dignified starting and initial point, the one from where we begin the counting. And this story continues to inform my work and my commitment to working and being morally responsible for one’s actions. It is not about finishing a day’s work, but it is about changing in a positive way the life of another person.

From the Logbook: "a new blog series" said our Executive Director

We receive feedback on our blog series, this is what has kept us going for the last 5 years of blogging, and we are often in search for original pieces and new thresholds to think about and reflect upon the work we do in our organization. Just for the last two years, we had the “Unsung Heroes,” we had “Learning across the Continents” and for this entry we have decided to launch a new series we have decided to call “From the Logbook: Employees of DSH Tell their Story." We are a small organization and each one of us often wears multiple hats and do overlapping tasks to plan an event, to organize a program, to file documents, to meet visitors, or to search for funding. Through the last ten years, we have had many employees come and then leave for other opportunities, but there is a core that has stayed, witnessed and fashioned the many transitions within the organization.  As the ED I’ve asked them to write a piece based from the logbook of their working lives within Dar Si Hmad. The object being to connect our readers to what goes behind the scene and to hear the experiences and voices of the members of this team that create, make and sustain the magic.