Today marks the World Day to Combat Desertification. The 2016 theme focuses on inclusive participation to prevent land degradation. A global observance event is being held in Beijing, China to "Protect Earth, Restore Land, and Engage People". The United Nations and others are gathering to celebrate “The Belt and Road,” a project that promotes green and low-carbon infrastructure construction in cooperation with countries connected by the historic Silk Road. Around the world, researchers, farmers, policymakers, and communities are coming together to work against the destruction wreaked on ecosystems by human-induced soil degradation and land mismanagement.

To mark the day, Dar Si Hmad's new Environmental Youth Ambassadors are writing blogs and poems about Morocco's deserts and the global problem of desertification.

We are reposting one of their pieces here. Check out the EYA blog for the original post and more content from these local activists!!

More than 20 years after World Day to Combat Desertification and Drought was first proclaimed on January 30, 1995, deserts cover 63% of our planet.

However dry and dead they may appear, the African Sahara, Arab Desert, Great Sandy Desert, Thar Desert and even Antarctica Desert are homelands to biologically diverse ecosystems, a population of 2 million people and countless cultures that have made a home in the arid deserts.

In Morocco, 266 000 Km square is covered by desert. Through history, the desert has been Morocco’s gateway to the Sahara and the route of trade caravans linking the north of the continent with the south. It is the homeland of a 500 000 population and the beautiful Hassani culture.

Unfortunately, the surface of arid deserts is growing significantly, destroying countless ecosystems in the process. This is known as the desertification phenomenon.

According to the Princeton University Dictionary, desertification is defined as “the process of fertile land transforming into desert typically as a result of deforestation, drought or improper/inappropriate agriculture”.

It is the expansion of biologically destroyed land at the expense of productive land, occuring mainly in dry lands when a land’s vegetation is destroyed and the land is no longer productive. Desertification is caused by several factors such as drought, climate change and especially the unhealthy overproduction and mismanagement of land. According to the United Nations, since 1990, about six million hectares of productive land have been lost around the world every year as the land becomes degraded and less fertile. An estimated 135 million people are at risk of being driven from their lands because of continuing desertification.

This phenomenon does not only affect land and ecosystems but also gives rise to social, economic and political tensions that can cause conflicts, further poverty and land degradation.

Therefore, practical and effective prevention measures against desertification are required in threatened areas. One such measure is Morocco’s National Charter for Environment and Sustainable Development, “Plan Maroc Vert”. The Charter was launched in 2010 and will form the framework for all future national environmental laws, guiding government officials on natural resources, the environment and sustainability.

In addition to law enforcement, effective solutions include preventing soil erosion through rational land management, planting and protecting windbreaks and shelterbelts of live plants, improving early warning systems and water resource management, and developing strategies that address poverty at its roots. This last is especially imporant because poverty forces people who depend on land for their livelihoods to overexploit the land for food, energy, housing and sources of income.

The wildness and desolation of natural deserts are the source of their charm and beauty; however, this charm is lost when human-induced deserts caused by overproduction and climate change destroy other ecosystems, and in the process, the life of millions.

Last but not least, don’t hesitate to learn more about UN’s theme for this year’s World’s Day to Combat Desertification and Drought. 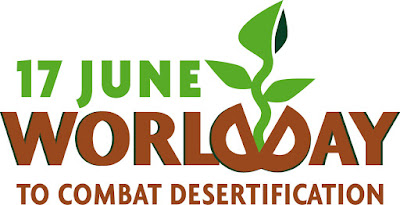