An overview on the Summer Tech Camp 2020

Saturday 15th August 2020 wrapped up ten days of the third edition of the Summer Tech camp, organized by Dar Si Hmad for Development, Education and Culture. 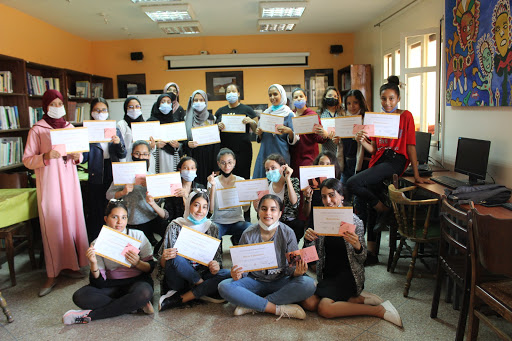 The camp offered an amazing learning opportunity for young unprivileged girls in Middle school or entering High School, to initiate them in technology and a better, safer use of the internet.  Each day the camp ran from 9:30 am to 4:00 pm with a communal breakfast and the launching of the day with an ice breaker activity for fully energized sessions.

The camp curriculum is inspired from the last editions of the Summer Tech Camp, Sifna Teknologia, with few updates based on this year’s beneficiaries’ needs. As its name indicates, the Summer Tech Camp’s main topic is "Technology," yet it features sessions related to critical thinking, to personal discovery, self awareness and to soft skills such as public speaking or team work that the girls will inevitably need both in their personal and professional lives. 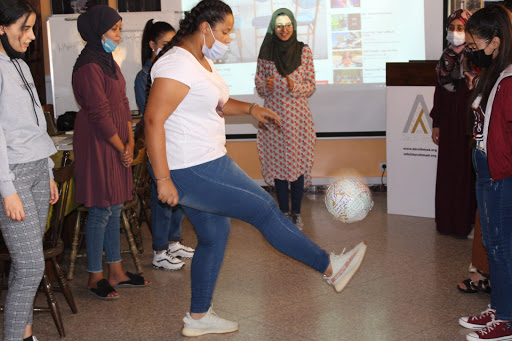 The first day of the camp was all about introductions: the camp and Dar Si Hmad. We then played many games to discover more about the girls and build a solid network. We were impressed by the variety of talents that made up the program and the different skills the girls had:  some could sing beautifully, some played football (a predominantly male sport), some were iron ball players, some were active Turkish language learner, many were K-POP fans, and all loved gaming  and are passionate young women.

Then, we established together the group rules, we call it our constitution, in order to guarantee a healthy, comfortable and enjoyable learning experience for everyone. 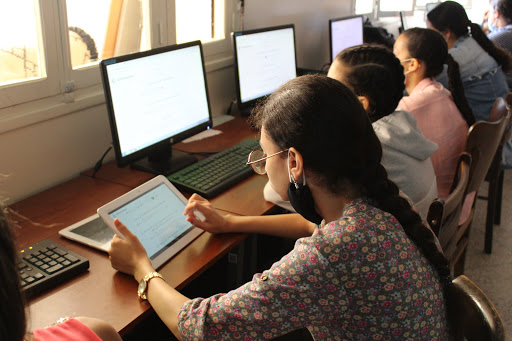 After lunch we introduced the girls to the technical world of computers and the ABCs of web surfing. The girls were very interested in the new information and facilities they discovered, especially that they knew the internet through phones and many of them rarely use a computer. To apply what they have been taught, the girls were asked to do Webquests on different topics and share their results with their peers.

On the 2nd day, the girls watched a TED Talk video about the “Hole in the wall” experiment. Each one expressed her opinion about the experiment and how we can relate to it as technology knowledge seekers. Next, we talked about the difference between software and hardware. We practiced installing Mozilla Firefox and learned more about the facilities extensions we could bring to the web browser we used. ALEXA was one of the extension examples we focused on especially that it was needed for the workshop on sources of credible information, on detecting fake news, on avoiding illegal downloadings and plagiarism. The 2nd day was also the occasion for girls who do not have an email address to create one and write their first email. As new High-Schoolers expected to give presentations, we initiated them into powerpoint and Google slides use.

Day 3  started with an open discussion about the stereotypes girls have about the technology world. Followed by two Ted Talks about computer science and women in technology; the girls found more arguments to better express themselves about the topic. In the following session, the girls understood the principle of Wikipedia, its accuracy and practice advanced search Google offers.

“Video games” was an interesting session especially for those who love gaming, and they were surprised to discover the other side of video games through gender representation in video games. Girls realized how important it is to be aware of everything they consume from the internet. We then suggested some instructive games and clarified that learning can happen through fun games.

Given the current situation of the pandemic and the schools’ lockdown, we figured out that the girls will need a session related to online learning and the possible platforms that can be used for this end. The girls mentioned that they only used Whatsapp groups to study and did not know there were other platforms that would offer them a better virtual learning experience; that is when we introduced them to different platforms such as Zoom and Teams, and we eventually had a class simulation on Google meet. The girls learned how to launch a virtual class themselves and invite their friends. 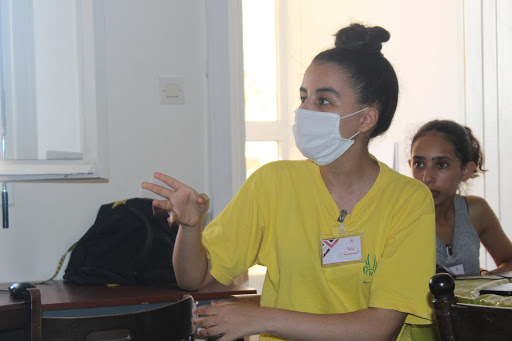 To clarify the importance of self awareness we tackled on Day 3, the program of day 4 started with a session on critical thinking, its definition, steps and effective tools to shift one’s way of thinking. After a practice in which girls had to think and use their mental abilities, they had a workshop on DIYs and had free time to find a DIY idea and determine the materials they will need. In the afternoon, the girls had a workshop on digital photography that focused on practical techniques/criteria to take good pictures and edit them online in a way that would  guarantee an effective story telling. 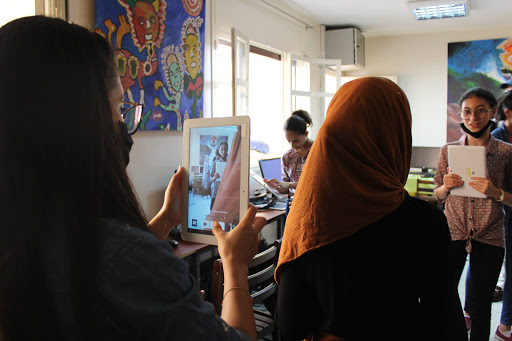 Day 5, we could not have the planned visit to the Berber Museum, closed because of the pandemic. We started the day with a discussion on museums, their importance and the girls' experiences in museums. We then introduced them to the platforms that can allow them to visit far away museums without moving from their chairs or buying a ticket. After that, we had a workshop on videography. We started the workshop by projecting the videos Khadija Amahal had made as a summary of the previous days of the camp. The girls were excited for the tips and the techniques of videography that would allow them to make such videos themselves.

At the end of the workshop we asked the girls to practice what they learned so far and make videos on their own about any topic they want. We gave them video ideas to guide their thinking; an interview, a set of pictures telling a story with a sound, voiceover or a vlog of a day in the camp. 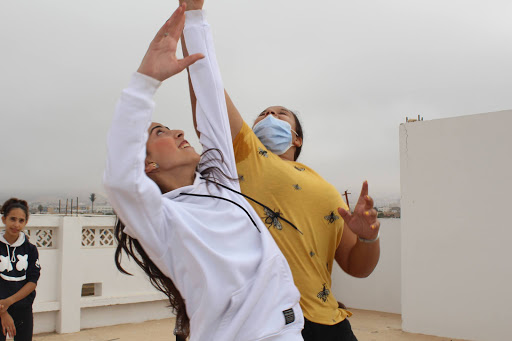 Day 6 was a pause from the serious workshops and an opportunity for the girls to have fun through playing a variety of games that needed effective team work. The afternoon was solely dedicated to working on the DIY projects and presenting them in front of their peers. 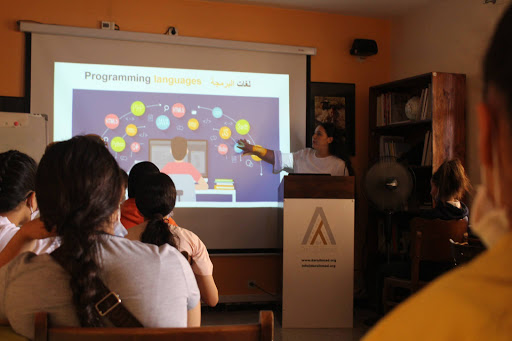 Day 7 and back to serious work! The first thing we think about when we hear technology is the weird writing that we call a code, so it was important to include a session on coding and binary alphabet. Coding might seem very complicated yet if explained through games it becomes fun and easy to understand. In the afternoon the girls were introduced to AI artificial intelligence and had an open discussion about its uses in our daily life, its future and limits.

Day 8 was a personal discovery journey. Girls enjoyed taking personality tests and found out more about their strong points. The afternoon was a session on possible schools and majors the girls can pursue. Also, the girls were very excited for the exchange programs session especially that the facilitator Khadija told them previously that she had visited many countries through exchange programs. 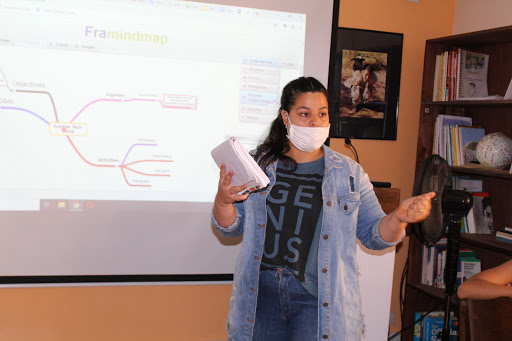 Day 9 the girls had to work on their final projects (presentations and videos) so as to share them within the afternoon. Before the presentations we included a session on Public Speaking so that they have an idea about the way they should present their project. The girls’ final projects incredibly rewarded our efforts. Upon completion of the training, the participants seemed to take our feedback into consideration. 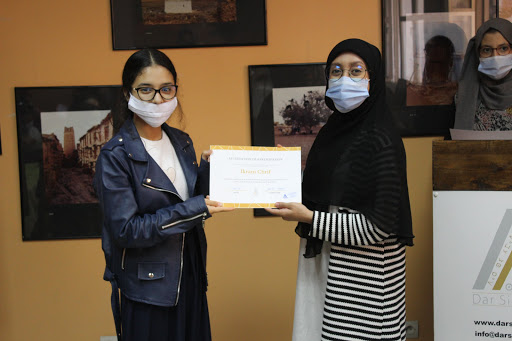 On day 10 participants showed their satisfaction about the training and they expressed wishes to take part in future programs organized by Dar Si Hmad.