It's World Water Day! We at Dar Si Hmad love water. Our flagship fog harvesting project is all about water - accessing it, caring for it, learning from it, using it sustainably. The new forestry project we announced yesterday will rely on fog water to rejuvenate a sustainable ecosystem in Southwest Morocco. Our Water School engages children in the bled (Moroccan countryside) in participatory learning around water science and conservation.

Unfortunately, the news from Morocco around water isn't all good. Frequent droughts induced by climate change, land and soil degradation, and mismanagement of natural resources have created a critical water situation in Morocco. The UN Department of Economic and Social Affairs has projected that by 2025, Morocco’s water availability will drop below the absolute scarcity threshold of 500 cubic meters per person per year. With drought striking every three years, a severe constraint has been placed on the expansion of its agricultural production, which makes up 19 percent of Morocco’s GDP.


Morocco has recently invested in dams, water supply capacity, and expansive irrigation systems that ensure water security for urban and agricultural demands. Although this focus on supply has been largely successful, there remains a serious need for policies that drive sustainability, such as water conservation and protection, the management of water demand, functioning sanitation systems, and equitable service development for rural communities. The increasing demand for fresh water has superseded the dwindling reserves of this precious resource that is being consumed faster than it can be replaced. Morocco’s water management strategies must address the limited infrastructure programs and the persistent gaps in service access, particularly between urban and rural areas. There remains a need for programs that promote economic security, social equality, environmental sustainability, and the direct participation of local communities.

Among some of the innovative projects dedicated to solving Morocco’s water issues is Dar Si Hmad’s Fog Harvesting Project, based in five highland villages in the Aït Baamrane region of southwest Morocco just 30 kilometers away from Sidi Ifni. Due to its unique geography situated at the convergence of the Anti-Atlas Mountains, the Sahara Desert, and the Atlantic Ocean, these remote villages are particularly vulnerable to climate change and suffer from increasing drought cycles, structural poverty, and state neglect. During periods of little rainfall, water would have to be delivered to cisterns by water trucks, which was costly and time consuming.  Women and girls experienced the brunt of these burdens as they spent up to four hours per day fetching poor-quality water from open wells. This daily chore often prevented girls from attending school.

The Fog Harvesting Project uses existing natural resources of the region to help alleviate the constant water stress. The mountains of the Anti-Atlas where the isolated villages are located experience a unique combination of cold currents and atmospheric pressure originating from the Canary Islands, creating stratocumulus clouds that swath these mountains in thick fog. The project harnesses this abundance of fog, previously considered “dead water” and therefore “useless”, and allows it to condense on fine mesh panels so that it can be transformed into fresh water. The pure water is subsequently mineralized with groundwater that is then piped straight to the taps of people’s homes. There are currently twenty fog nets that provide twelve cubic meters of water per day, nearly tripling the water availability to 30 liters per person per day in the five beneficiary villages.

Informing the rationale of the Fog Harvesting Project is the concept of integrated water resources management (IWRM), which promotes the coordinated development and management of water resources to both advocate for social and economic welfare and advance environmental sustainability. Educating and empowering the local population to learn about and actively participate in this project are essential to its success and sustainability so that the ecological and socioeconomic vitality of the community is ensured.

The Fog-Harvesting Project was officially inaugurated a year ago in honor of World Water Day. Each year on 22 March, the United Nations leads an annual celebration of water that raises awareness for water-related issues around the world. In 2015, the theme was "Water and Sustainable Development", perfectly capturing the holistic work our fog harvesting project does in providing potable water, empowering women and girls, and supporting sustainable livelihoods.

The 2016 theme, “Water and Jobs”, sheds light on the nearly 1.5 billion people who work in water-related sectors and focuses specifically on millions of those workers who remain unrecognized or unprotected by basic labor laws. This global theme draws attention to how the quantity and quality of water available to communities can change workers’ livelihoods. By highlighting the relationship between water, appropriate labor laws, and human rights, the international community can work together towards globalized sustainable development and promoting the human right to water.

In accordance with the “Water and Jobs” theme, Dar Si Hmad is using World Water Day to spotlight the many jobs our fog project creates, requires, and supports. In the Anti-Atlas Mountains of Southwest Morocco, dozens of women work to ensure the viability of the fog water system. Although the project has significantly alleviated the amount of time women and girls spend gathering water every day, gendered dimensions around water resources remain. Women's ancestral role as water guardians in their homes and communities was a source of power for them. To ensure that the provision of fog water did not have negative unintended consequences for rural women, Dar Si Hmad developed a system through which women maintain control over fog water via mobile phone management. Literacy, numeracy, and ICT trainings conducted by Dar Si Hmad staff and volunteers have helped Amazigh women monitor the fog water system and communicate any issues via SMS message. Through this system, women's water guardianship duties no longer take three to four hours each day. Expanded professional skills from the ICT trainings, along with WASH workshops and other community education initiatives, have given women enhanced job prospects. Capacity-building sessions have helped the women to consider their own educational or economic goals. Many are now exploring the creation of new argan co-operatives. 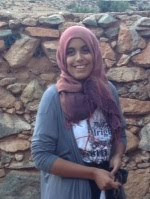 Born in the rural Aït Baamrane region of southwestern Morocco, Zaina Hamou Ali is a twenty year old with six years of primary schooling. Until the 2015 inauguration of Dar Si Hmad’s fog-collection project, she spent 3 hours per day walking to distant wells to collect water for her family’s household use. Zaina is strikingly astute, can forge working relationships between diverse women, and has a passion for engaging with researchers, international students, engineers and anyone else who visits her village. Her initiative and fearlessness are an asset to our team and represents the extraordinary untapped potential among women in the communities where Dar Si Hmad works. Today, Zaina works as our Community Liaison in the bled. Her work is vital to the success of our women's capacity-building sessions and the social elements of maintaining the fog water system. 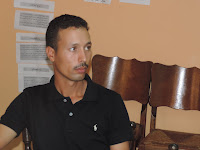 Hussein Sussan was born and raised in the foot hills of Boutmezguida, in Morocco’s Anti-Atlas Mountains. He has participated, along with his Aït Baamrane community, in the creation of the fog project when construction began in 2011. Hussein has now taken on a formal job with us as our Fog Water Manager in Boutmezguida and at the site. In addition to managing technical elements of the fog project, Hussein regularly meets with fog village communities to discuss the project and participates in our Ethnographic Field School activities, sharing his love for fog and his homeland with visitors.

Water creates, sustains, and improves jobs. Meet the rest of our fog-inspired team here!
Posted by Dar Si Hmad at 9:18 AM