What has fog got to do with forests? Quite a lot, actually – both historically around the world and today in Southwest Morocco.

21 March has been celebrated as World Forestry Day since 1971 by the Food and Agriculture Organization of the United Nations. Four years ago, the day was adopted globally by the United Nations General Assembly as the International Day of Forests. The day encourages action and education around all types of forests. We all depend on forests for food and oxygen. Globally, some 1.6 billion people directly depend on forested areas for their livelihoods, medicine, fuel and food. Sustainable care for our trees is crucial to global justice, the elimination of poverty, and food security – today and tomorrow.

Forests account for one third of our planet’s land area. Unfortunately, that number is shrinking. Intentional deforestation for timber and farmland reduces forested areas; desertification and climate change further threaten beautiful and vital ecosystems. These problems are circular: trees play an important role in the planet’s carbon system, using carbon in their photosynthesis and releasing the oxygen we need to breathe. Cutting down trees increases carbon emissions and makes climate change worse. Increased drought and severe weather events then contribute to more forest destruction.

Happily, there are steps we can take to protect our forests, our planet, and ourselves. The theme of the 2016 International Day of Forests is Forests and Water. “In this first year of implementing the 2030 Agenda for Sustainable Development, the International Day of Forests focuses on their role in supporting water systems…Investing in forests is an insurance policy for the planet.”
-United Nations Secretary-General Ban Ki-moon

Dar Si Hmad is currently embarking on a project to use our fog project to invest in forests.

In the Aït Baamrane region of Southwest Morocco, Dar Si Hmad and our partner villages run the largest fog harvesting system in North Africa. The mountainous desert landscape does not allow for the kind of collection Canary Islanders can do in their cloud forests. Instead, we use specially designed nets to capture fog. A carefully maintained system stores and distributes the fog water to five rural Amazigh villages. The families in our fog community now have running water in their homes for the first time.

Since we began our feasibility study for the fog project more than a decade ago, significant advancements have been made in the technology around fog harvesting. With partners like Vicky and Germany’s Wasserstiftung, Dar Si Hmad is now putting in more efficient nets that are able to collect more water per square meter of net. 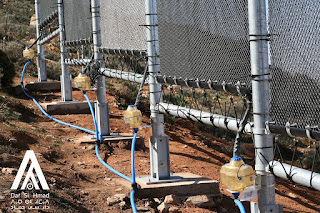 Thanks to regular community education and generations of local knowledge, our fog villages use water very sustainably. This means that our increased yield can contribute not only to water for more villages but also to expanding programs. We are now in the process of conducting a feasibility study and seeking funding for a reforestation project – to be fed with fog water. Using fog water to support reforestation will sustain a holistic, healthy ecosystem to the benefit of plant, animal and human life in the region in a way that is ecologically friendly and socially responsible.

Forests are vital to water for human life. The UN’s choice of theme this year helps raise awareness about how forests are key to the planet’s supply of freshwater. Trees act as natural water filters. Forested watersheds and wetlands supply 75% of our global supply of accessible freshwater. Nearly one-third of our largest cities rely on forested areas for drinking water.

But water is also vital to forests! The interconnected of natural systems creates constant feedback loops. We rely on forests and water. With projects like Dar Si Hmad’s new ‘fog forest’, we can give back to the ecosystems that sustain human society – and make sure that future generations are able to thrive.