Last Wednesday and Thursday, we had our very first RISE sessions
of the semester! Although they were just orientations to introduce our
participants to the program, the energy was high, and everyone seemed
very excited for the coming weeks. Wednesday’s session was led by Alex
and Hafida, and Thursday’s by Natalie and Ayman, both assisted by Maisie,
Georgia and Sara. The session began with an introduction to Dar Si Hmad
and a presentation about the fog project by Maisie, followed by an explanation
of the lesson plan for the next 10 weeks. 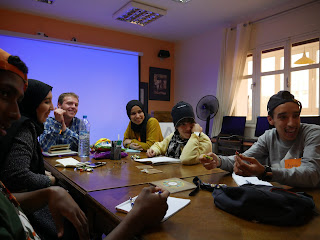 A fun RISE policy for late-comers is that they have to dance in
front of the class. On Wednesday, only one person was late, and
the class enjoyed his dancing very much. On Thursday, there
were quite a few late comers, who happily danced to Lady Gaga
as they arrived throughout the class. After the background on Dar
Si Hmad, we then re-energized with a fun name game, where we
went around the circle, and said our names and a descriptive adjective
beginning with the same letter as our names. This definitely presented
a challenge for people whose names begin with letters like “I” or “O”
(we got intelligent and outstanding). 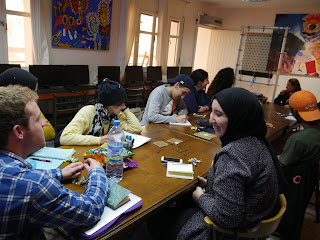 After a short break, we regrouped to discuss and develop the ethical
constitution for this RISE semester. The participants were mostly self
guided in this, given only small helpful suggestions by our staff and interns.
They decided on several important mandates, such as practicing active
listening, having open minded discussions, talking without interrupting, positive
attitudes, among others. We were very impressed with their abilities to work
together and develop their ethical constitution as a group. We also discussed their
individual learning goals for this RISE session, and asked participants to share
some goals they had.  Common answers included developing critical thinking
skills, working on public speaking, communicating better in English and learning
about other people’s ideas. We hope to address all of these learning goals in the
coming weeks. Next week, we will officially begin our discussions, starting with
Moroccan Identity and Stereotypes.
Posted by Dar Si Hmad at 3:35 PM