On Wednesday morning, I was greeted by new smiling faces as our guests from AMIDEAST
arrived at Dar Si Hmad. Our Moroccan speaking partners (Ayoub, Hafida, Karima, Oumhani,
Rkia and Fatiha) and I introduced ourselves to the group of American study abroad/ gap year
students. Being from a very similar background and current situation as many of these students,
I was eager to hear from them and share our experiences. Amazingly enough, there was one
girl from my current hometown and another boy from the city I grew up in for eight years!
I immediately felt a connection with this group.

Maisie gave the group a presentation about Dar Si Hmad’s history, programs and, most
importantly, the fog harvesting project. The group listened intently and shortly after we left for
Sidi Ifni. Upon arrival we had a delicious lunch, graciously made by Dar Si Hmad’s Hospitality
Manager and Cook, Hadda. I began speaking more in depth with the students about their
homes, why they decided to come to Morocco this year, and what their plans were next year
for college. I found that most of them had decided to take a gap year for some of the same
reasons I did; they wanted some distance from standard American education while continuing
to learn in a new and challenging environment.
After lunch, Fatiha Tachakourt led the group in a silly but fun ice breaker and gave us all a
wonderful lesson in Tachelhit -- the language spoken indigenously in this region of Morocco.
We then had a brief historical tour of Sidi Ifni, led by Dar Si Hmad’s executive director Jamila
Bargach, where we learned about the Spanish conquest of the land. Following the tour, we
had dinner as a group before turning in early for the big hiking day to come! 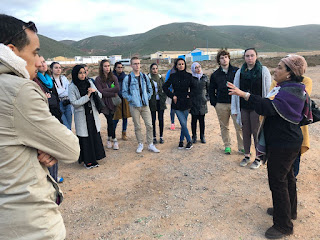 We woke up early Thursday morning to gear up for hiking Mount Boutmezguida to see the
famous fog harvesting nets that we’d all heard so much about. The idea of fog harvesting had
sounded so abstract that we were all eager to see if these nets were, well, simply nets! In
orientation the day before, Maisie and Jamila had said that these nets collect 34 tons of water
per day on average and currently supply 14 (soon to be 15) local villages with running water.
They also explained to us that traditionally, women in this area would walk 3-4 hours a day in
treacherous conditions to get water from wells for their families, but due to extreme climate
change, there was never enough water. With these statistics running through my mind, I had
high expectations for these fog nets!

We partnered up and began our long hike up to the highest mountain in the region. We had a
whole crew of about 30 students, seven Moroccan speaking partners, the Dar Si Hmad staff,
two donkeys and a pack of dogs, all led by one of the villagers. Jamila looked like a Moroccan
goddess perked up on one of the donkeys as she showed us the site of the Oasis School,
the new farm, the solar powered water pumps and the traditional school buildings. Maisie and
Jamila had warned us to pace ourselves and not worry so much about getting to the top of Mt.
Boutmezguida, but rather to enjoy our surroundings, look for signs of the project (pumps, pipes,
and reservoirs), ask questions and really get to know the people we were with. This was a great
reminder for us Americans who are so goal oriented to slow down and simply enjoy the journey. 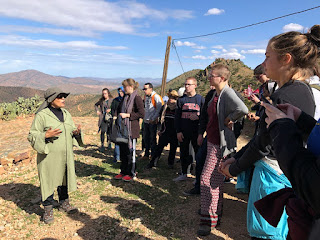 As the day went on, we continued our long trek up the mountain, stopping for multiple water and
picture breaks. I never seemed to be able to keep up with the weather; one minute I was freezing
and the next I was being scorched by the sun. Jamila explained to us that these are the
conditions which allows fog perfect for harvesting to be created. The hot air from the Sahara
Desert mixes with the cold air from Spain and the Canary Islands to form the ideal-sized droplets
of fog for collection. 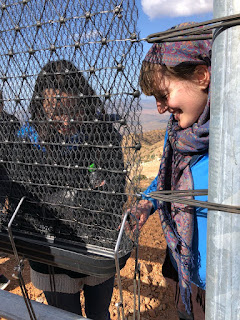 After three and a half hours of walking and scrambling, we reached the peak of Mt. Boutmezguida
where we were greeted by the rows of fog nets. Everyone was so tired and hungry at that point
that we sat down and ate Hadda’s delicious loubia for lunch right away. After everyone had had
their fill, we washed our lunch down with some of the water collected by the nets themselves.
We then ventured up to take a closer look at the nets when Julia Elliot exclaimed, “Whoa, they’re
really just nets!” taking the words right out of everyone’s mouths. It was so fascinating to see such
a simple idea that produced such an impressive yield. 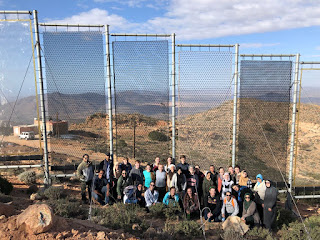 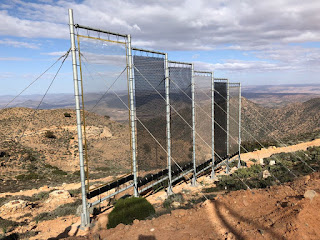 With bellies full of loubia and fog water, we began our hike down the mountain, which took
considerably less time. We had many laughs as new people tried riding the donkeys, and we
were all proud of ourselves for completing such a challenging hike! 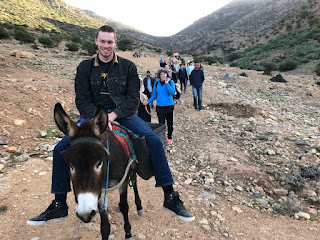 Our evening concluded at the local Madrasa for tea and Quranic chanting. As the voices of
about twenty men filled the room with their unique tones, I felt grateful and proud to be a part of
such a unique experience with my newfound friends.

Friday morning started off with a lovely yoga session on the beach in Sidi Ifni, led by one of our
Moroccan speaking partners, Rkia. There were many laughs and we all got very sandy, but Rkia
reminded us all the importance of following our breath, loving ourselves, and being content in
this time and space.

The rest of the day was spent at La Foundation where we watched a documentary about Dar Si
Hmad’s installation of the fog nets and followed up with questions for Jamila on the logistics,
challenge,s and steps in getting this project running and reflecting on yesterday’s adventure. After
couscous, we watched the movie La Source Des Femmes, a film about women in the Bled who
go on a “love strike” against their husbands because they are tired of carrying water for their
families everyday and facing serious injuries while their men sit around drinking tea. The film
was intense but also surprisingly informative and impactful. Following the film, we broke into
groups to discuss different aspects of Moroccan life seen in the film: gender roles, religion,
sex, stereotypes, how women are viewed in the eyes of men, flaws in the film, etc. Finally, we
came together as a group to share our concluding highlights and observations. As the evening
wrapped up, we got to ask our Moroccan speaking partners more specific questions about being
a young adult in Morocco. We discussed things such as education, religion, stereotypes, and
pressures they face from family and peers.

Following our final dinner, we had a reflection session in the hallways of Hotel Suerte Loca.
As the wind howled outside and rattled the walls around us, we discussed things we learned,
surprises we had, new self awareness and knowledge we had gained and will take back home
with us.

This excursion reminded me how much I appreciate and enjoy collaborating with like-minded,
passionate and open people. I also learned that small/ local initiatives do indeed have a greater
worldly impact both directly and indirectly. I have a greater appreciation for our resources,
including food, water and shelter, that are so easily to taken for granted. Most of all, I have
discovered the importance in having specific focus in achieving a goal, and that just because
an idea seems crazy or abstract, doesn’t mean that it’s out of reach. 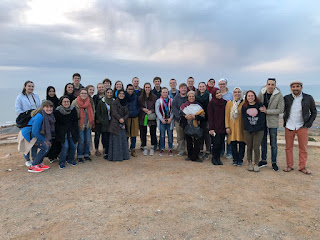