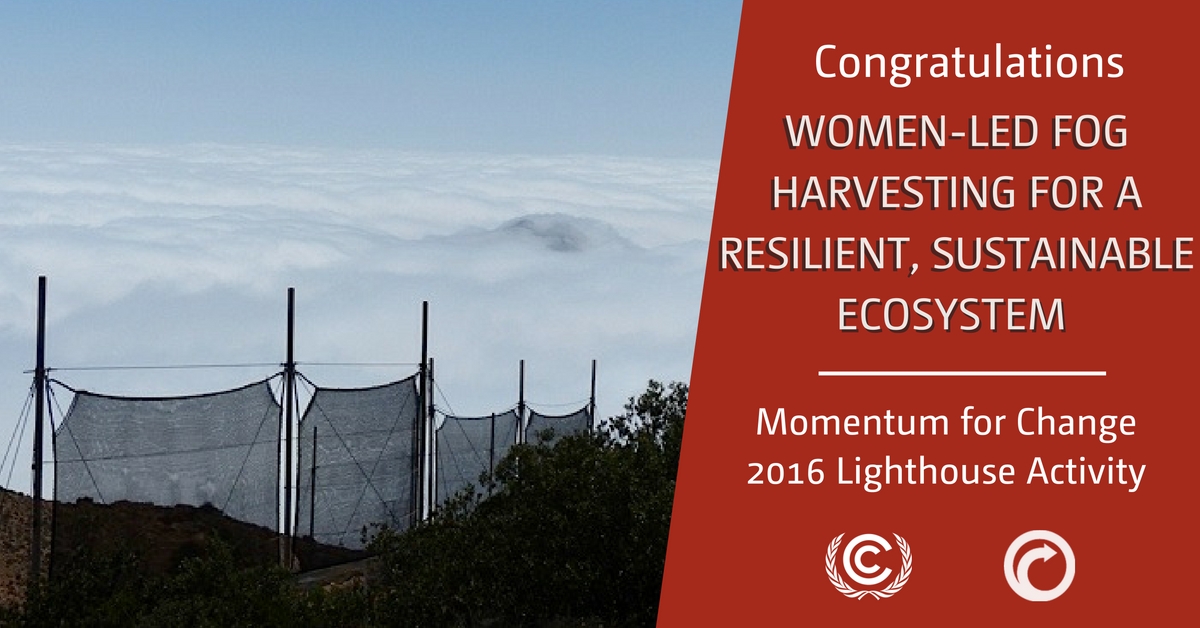 The United Nations Framework Convention on Climate Change (UNFCCC) Momentum for Change recognize the transformative climate action that is already taking place on the ground. It is an initiative spearheaded by the UN Climate Change secretariat as part of wider efforts to mobilize action and ambition as national governments work toward implementing the Paris Climate Change Agreement and the Sustainable Development Goals.
Winning initiatives, called ‘Lighthouse Activities, highlight some of the most innovative, scalable and replicable examples of what people are doing to address climate change, in the hopes of inspiring others to do the same. This year’s winning activities comprise an impressive range of projects and personal stories that touch on sustainability, climate protection, environmental consciousness and social responsibility. 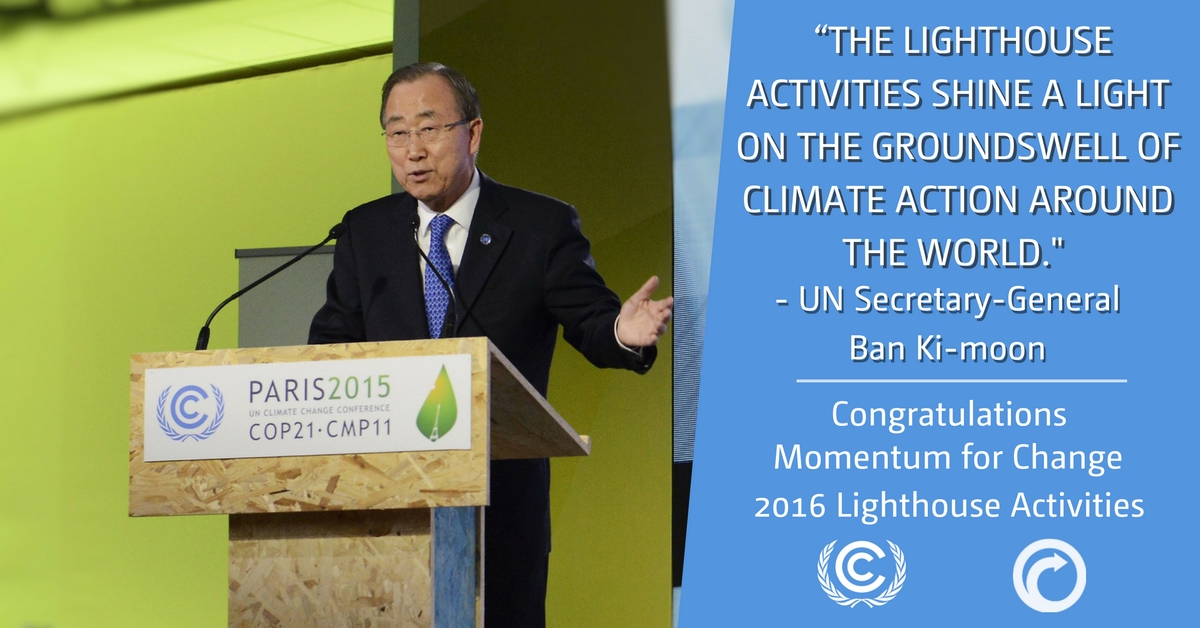 Dar Si Hmad (DSH) Fog-Harvesting project, the world’s largest operational fog-water harvesting system located on the edge of Morocco’s Sahara Desert was announced today as one of 13 winners of the United Nations Momentum for Change award. The project has been awarded the prize under the Women for Results focus area which showcase women-led initiatives that address climate change. 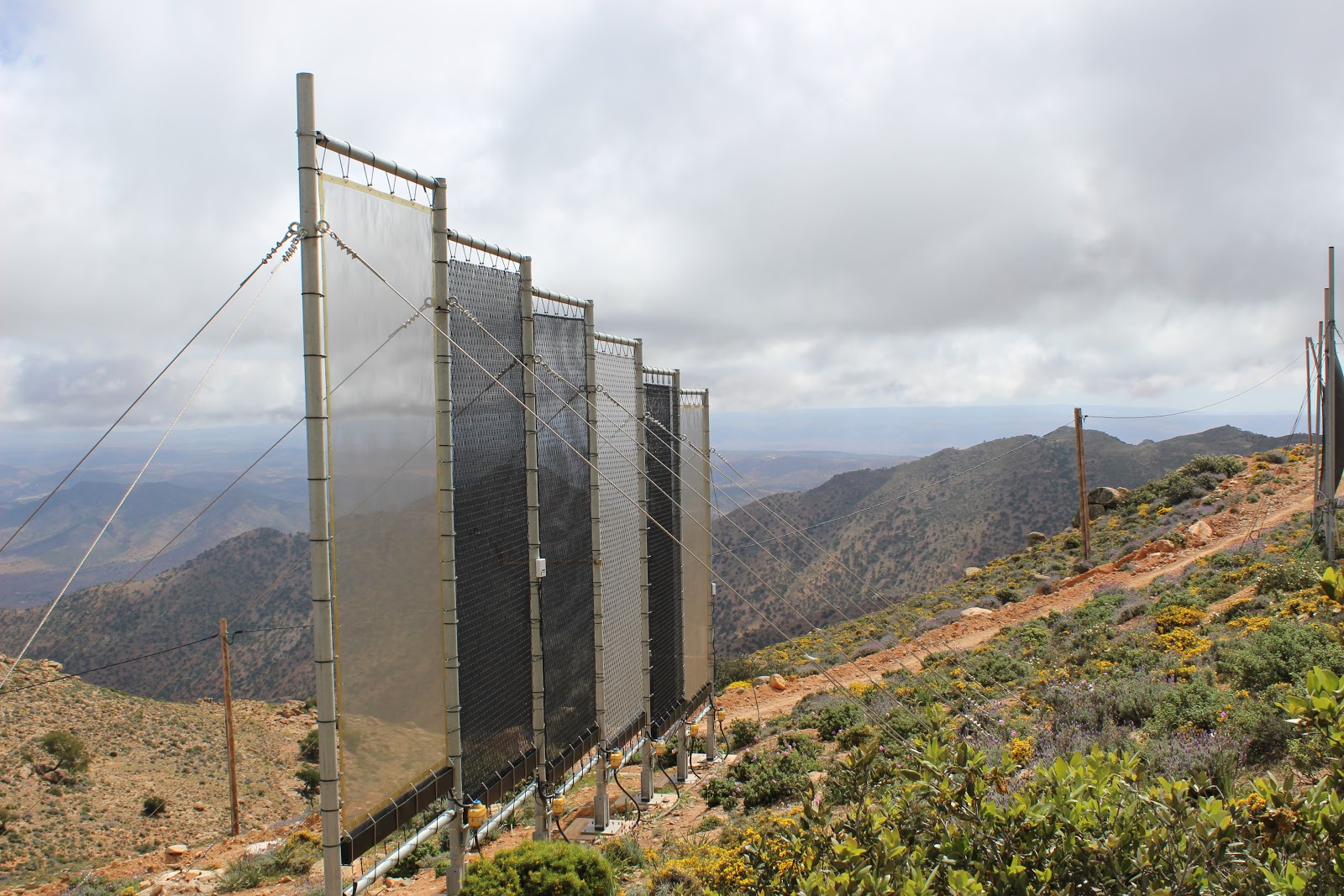 The Fog-Harvesting project includes 600 m2 of nets to harvest fresh water from fog, serving more than 400 rural Berber residents, most of them are women. Starting in January 2017, the project will be upgraded to CloudFisher, a next generation fog-collection technology, and will connect 8 more villages to the grid.  CloudFishers, designed by our partner Wasserstiftung, is revolutionizing the technique of fog-collection.


“The fog project should not simply be reduced to the story of technical prowess and success: there are more complex and intertwined stories to tell. One narrative is that of curiosity and aspiration; one of motivation and quest for dignity; and one of rigor and determination. This fog catching project has already irrevocably altered the women’s daily patterns and the balance of powers within Berber households. Prior to the fog project, Berber women bore the laborious task of carrying water from distant wells – a burden that greatly limited opportunities for young women,” said Dr. Jamila Bargach, Executive Director of Dar Si Hmad.


Other winning activities includes a Google-led project that could catalyse the rooftop solar market for millions of people across the United States, North America’s first revenue-neutral tax that puts a price on carbon pollution or a project that has established the first women-specific standard to measure and monetize women’s empowerment benefits of climate action. A full list of winners and more information about each of the 2016 Momentum for Change Lighthouse Activities can be found here: http://bit.ly/m4c-award


Together with the other winning projects, Dar Si Hmad Fog-Harvesting project will also be showcased at a series of special events during the UN Climate Change Conference in Marrakech, Morocco (7-18 November 2016).

The Momentum for Change 2016 Lighthouse Activities were selected by an international advisory panel as part of the secretariat’s Momentum for Change initiative, which operates in partnership with the World Economic Forum Global Project on Climate Change  and the Global e-Sustainability Initiative.
Posted by Dar Si Hmad at 11:59 AM