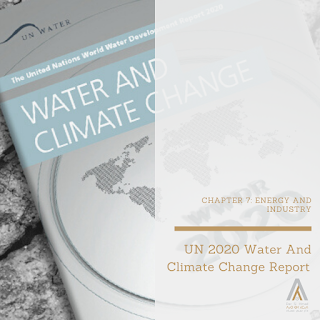 The seventh chapter of the UN 2020 Water and Climate Change report focuses on the industry and energy sectors. These sectors withdraw 19% and 10% of the world’s freshwater resources respectively, and their combined global water demand is expected to increase to 24% by 2050. Without adaptation and mitigation measures, climate change is likely to significantly impact water-related aspects of both industries. The main challenges for corporations in these industries are water scarcity, flooding, drought, and water stress. 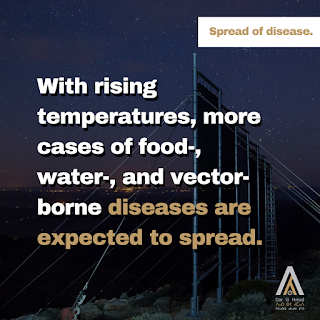 The availability and reliability of water is key to the functioning of industry and energy businesses who depend on and work with predictability. The uncertain nature of water stress caused by climate change, however, throws a wrench in their plans. Increased water scarcity can impact supply chains, since both sectors consume a lot of water. For energy in particular, any kind of water stressor (e.g. drought, increased water temperature) can drastically affect electricity generation on a global scale. 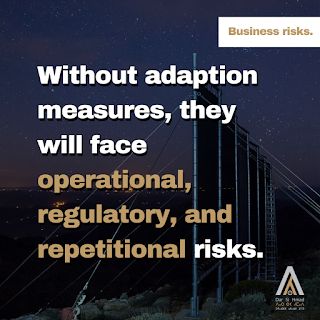 Operational risks concern the ability of these sectors to function. Water stress can decrease or even stop manufacturing or energy generation. Even before the production stage, these sectors’ supply chains may be affected which can disrupt or damage production equipment and infrastructure. Operational risks also may lead to unsafe working conditions, health effects, absenteeism, and lower productivity for the sectors’ workers.

Regulatory risks concern the presence or absence of climate change adaptation regulations. Although corporations will have to adjust to regulations, the biggest regulatory risk comes from a lack of regulations on water resources, which can lead to uncertain circumstances and limited supply of water.

With many consumers, investors, and stakeholders becoming increasingly critical of corporate practices as they relate to climate change, corporations may change their behavior to mitigate greenhouse gas emissions and adapt to climate change. Failure to do so may result in bad press and a poor reputation. 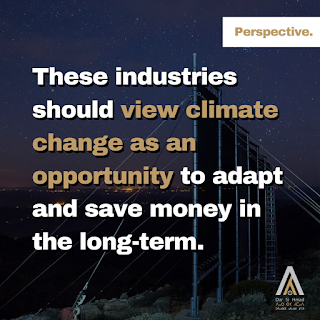 The report acknowledges that water scarcity and climate change have been recognized by the energy and industry sector for a reasonable amount of time, and stresses that these sectors should see climate change as an opportunity. Corporate reactions to climate change have been broad and include both mitigation and adaptation measures. Corporations can be incentivized to act when thinking about the cost of action versus inaction, where inaction will likely lead to significant losses over time.

For the energy sector, an opportunity exists in lowering both greenhouse gas emissions and water use at the same time. Reducing energy demand and increasing efficiency, but it is not enough. Low-carbon renewable technology such as solar photovoltaic and wind energy are the most promising energy alternatives because they also consume relatively less water. That said, not all renewable energy sources reduce water demand, such as geothermal energy which requires cooling water.

The report also focuses on hydropower, which provides 16% of the world’s electricity and 70% of renewable power. Although hydropower consumes water, water that passes its turbines often travels downstream to be used in other ways. Hydropower, however, is dependent on sufficient water levels. Water scarce areas should think critically and assess projected water levels when considering the creation of hydropower infrastructure such as dams.

For the industry sector, an opportunity exists in decarbonizing their production processes. Some examples of process changes include using low-cost zero-carbon electricity for high-temperature electric furnaces, or switching to nuclear or hydropower. These measures would bring emissions to near zero.

The report ends this chapter by stressing the energy and industry sectors will have to move away from a ‘business-as-usual’ and ‘quarterly capitalism’ mindset. Corporations will need to acknowledge the long-term risks of doing nothing to mitigate or adapt to climate change, and should instead see climate change as an opportunity to avoid unwanted costs.