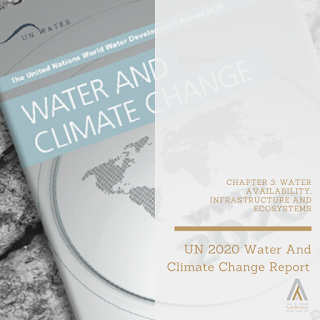 Two major water infrastructures that need to be assessed are dams and sanitation and hygiene infrastructure. Dams are costly, can have negative environmental and social impacts, and can be destroyed or weakened by the effects of climate change. Many existing dams in places like the United States are decommissioned, so it is vital that future dams like those being built in Morocco are climate-resilient. Sanitation, and hygiene infrastructure are at risk of facing increased damage from climate change. Flooding sewer pumping stations, for example, can spread faces and associated viruses, causing severe health-hazards for the population. Although this is not a pretty example, it is emblematic of the need for climate-resilient infrastructure.

Options to enhance water security under a changing climate
In order to secure our water in a changing climate, we need to innovate conventional water infrastructure so that it factors in drought resistance, flood control, regional development and other needs conjunctively and yet provide public goods (navigation, river basin management, maintaining ‘ecological’ river flows, etc.), and recognizes the cross-sectoral and multi-purpose nature of water.

The report also states that it is increasingly necessary to consider unconventional water sources to ensure accessibility to water. All strategies must be evaluated for their environmental impacts and associated human health risks. 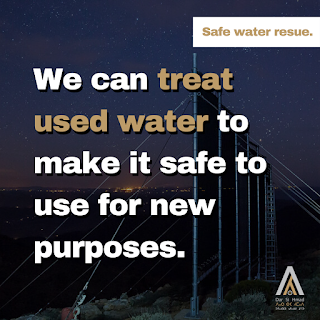 Safe water reuse/reclaimed water: Treating used water for new use is a way to save water. This is mostly done in arid and semi-arid regions that use treated wastewater for irrigation. In Namibia, the city of Windhoek has used this strategy for over 50 years. There is growing potential for safe water reuse in Europe, particularly in Portugal and Spain. 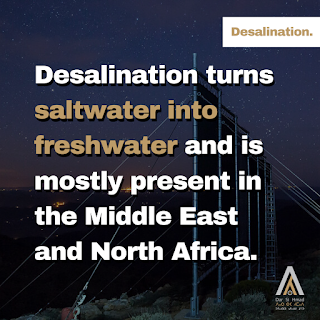 Sea water and brackish water desalination: Desalination turns saltwater into freshwater and is mostly present in the Middle East and North Africa. Although the source of seawater is unlimited and renewable energy sources are becoming cheaper, the desalination process does consume a lot of energy. 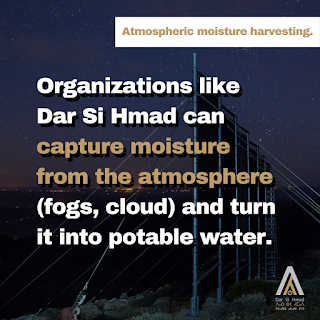 Atmospheric moisture harvesting: Cloud seeding or fog water collection like Dar Si Hmad’s works in areas where fog is abundant. Because of the limited reach of fog, this works best at the local level and is a low-cost and low-maintenance approach.

Offshore aquifers: According to the report, 0.5 million km3 of fresh/brackish water exists in offshore aquifers located below shallow (<500 m) ocean water within 100 km of the shoreline. The report spends little time talking about offshore aquifers because it points out that offshore groundwater is not the solution to water scarcity, although it can be weighed with alternatives.

Physical transportation of freshwater by the sea: This strategy involves shipping freshwater from places like the Amazon, or icebergs or ‘shaved ice’ from icebergs, around the world to places in need. This was considered for Cape Town South Africa in 2017-2018, when the city almost ran out of water in a severe drought. This strategy only exists as a concept, however, because it is costly, requires a large fleet, and has large potential losses.

Mitigation options for water resources management
Mitigation measures should also be implemented because water management produces 3-7% of the world’s greenhouse gasses, especially from energy used to power systems and the biochemical processes involved in water and wastewater treatment. 80-90% of wastewater in developing countries, however, is not collected. Collecting wastewater may be a positive step in decreasing greenhouse gas emissions from water management.

Finally, wetlands and peatlands can be conserved and sustained because they accommodate the largest carbon stocks and store twice as much carbon as forests. Unfortunately, many wetlands and peatlands are poorly managed and drained for agricultural purposes, which releases more carbon dioxide and other greenhouse gases into the air.