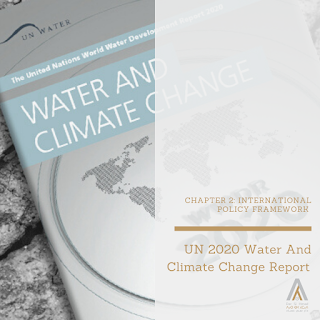 The second chapter of the UN 2020 Water and Climate Change report dissects the UN’s 2030 Agenda for Sustainable Development (2015), Paris Agreement on climate change (2015), Sendai Framework for Disaster Risk Reduction (2015), and several international water conventions. The report concludes that almost all of these frameworks do not address water management by name, even though water is an underlying connector in all frameworks.

The 2030 Agenda for Sustainable Development
The 2030 Agenda for Sustainable Development is a collection of 17 goals that aim to reshape global development in ways that allow us to “reach the future we want whilst leaving no one behind.” Water serves as an often unacknowledged, yet vital, connecting factor for achieving the sustainable development goals (SDGs), particularly water being essential for basic human needs (SDGs 6, 5), but also for marine (SDG 14) and land (SDG 15) ecosystems, for producing food (SDG 2) and energy (SDG 7), supporting livelihoods (SDG 8) and industry (SDGs 9, 12), and providing sustainable and healthy environments to live in (SDGs 1, 3, 11).

SDG 13 recommends we “take urgent action to combat climate change and its impacts,” is the SDG most explicitly concerned with climate change. Although it does not specify water-related issues, the goal has several water-related targets and has designated indicators such as strengthen resilience and adaptive capacity to climate related disasters (e.g. floods and extreme weather events). The fact that water-related issues are not called out by name is emblematic of what the report calls a “fundamental disconnection” between the SDGs themselves, as well as other global frameworks.

SDG 6 recommends we “ensure availability and sustainable management of water and sanitation for all,” and was reviewed in the 2018 July session of the High-Level Political Forum. Here, countries acknowledged that SDG 6, similarly to other SDGs, were being addressed in a siloed manner. This lack of connection is considered as the major reason for countries around the world not on track to meet the targets of SDG 6.

The Paris Agreement
The Paris Agreement on climate change, a set of legal instruments referred to as protocols from the UNFCCC, is another relevant international policy framework. The Paris Agreements highly recommends to keep the global average temperature below 1.5ºC above pre-industrial levels in order to reduce the risks and impacts of climate change. It does this by having all parties to the Agreement determine, plan, and regularly report adaptation and mitigation measures, which are referred to as nationally determined contributions. These NDCs are to be reviewed every five years, although reporting the progress of NDCs is voluntary. Parties are also encouraged to adopt national action plans, which are medium- to long-term adaptation tactics that address and integrate the SDGs and 2030 agenda when appropriate. The Paris Agreement also recognizes the essential roles of non-state parties (including but not limited to local authorities, the private sector, academia, marginalized populations, and civil society organizations like Dar Si Hmad, play in reaching its goals.

The Paris Agreement is a landmark international policy framework concerning climate change but as recognized in the COP25 of 2019, achieving the goals of the Paris agreement have proven to be more difficult than anticipated. Additionally, Frank Bainimarama, Prime Minister of Fiji and President of COP23, said at the closing plenary session of COP24 that the world needs “five times more ambition, five times more action” in order to achieve the goals of the Agreement.

The goal of the Sendai Framework is to achieve “the substantial reduction of disaster risk and losses in lives, livelihoods and health and in the economic, physical, social, cultural and environmental assets of persons, businesses, communities and countries.” To reach this overarching goal, it sets up seven standard global targets and four priorities for action. Building on this model, member-states should provide publicly available strategies regarding their national and local disaster risk reduction. Although water is rarely explicitly mentioned in the Sendai Framework, floods and storms constitute nearly 90% of the most severe natural disasters in question.

These provisions support adaptation measures and acknowledge climate change through the principles of equitable and reasonable use, ‘no significant harm’, and the precautionary principle. These principles are important in order to prevent the unfair use of international water courses, such as one country hoarding a water resource that naturally disperses water to other countries. 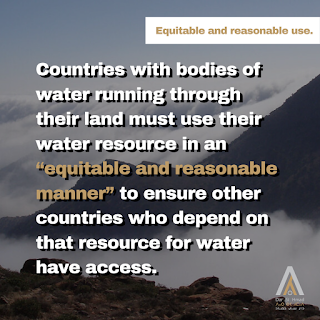 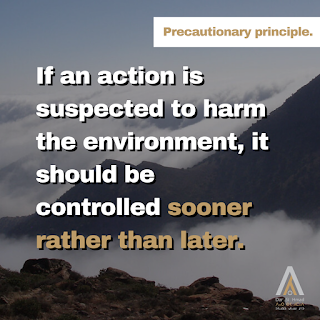 The precautionary principle in environmental regulations requires actions suspected to have environmentally harmful consequences should be controlled sooner rather than later. It is based on the adage ‘it is better to be safe than sorry’ and has gained recognition in the international community as a principle that should guide public policy.

Most international water conventions, however, do not explicitly mention climate change, but they do require member parties to “prevent, control and reduce transboundary impacts on water resources, including those related to adapting and mitigating climate change.”

Water as a connector
The report states that water acts as a connector to support the implementation of global agreements. After all, water is present in, connects, and touches all aspects of human society – economic, social, and environmental. The report states that strong political will and leadership will be necessary in order to highlight and mainstream the value of water in achieving the goals of global agreements. The report cautions that there are discrepancies when transforming global recommendations to concrete actions, hence strong leadership that acknowledges how water is not a stand-alone sector is an important and necessary ingredient in achieving the goals of all the aforementioned agreements.