Learning Across continents: Studying in Morocco

Written By: Isaac Bimpong N.
Isaac Bimpong N. is a 4th year Ghanaian student in Morocco at the National School of Management and Commerce (ENCG) of Ibn Zohr University in Agadir. He’s currently an intern at DSH working in the accounting and book-keeping department. 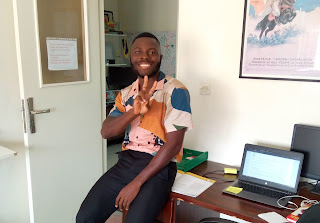 In high school, I always saw myself at the Cape Coast University reading some business-related programme with a few of my close mates. But I guess that scenario of the future I saw or imagined was false. Or maybe, it could only happen in a different dimension in the multiverse—only if there’s such a thing. In January 2016, I was sitting in a French class in Rabat with other students (some from Ghana and the rest from other non-French speaking countries on the continent).
I was buzzing when I learnt around the last quarter of 2015 that my application for a scholarship had been accepted to study in the Kingdom of Morocco as an undergraduate student. With excitement, I began preparations and in mid-December, we [a group of students] were in Morocco. Within a six months period, we took French classes to equip ourselves for school given that, all courses in Moroccan public universities are taught in French except specific language subjects like Arabic, English, Spanish, etc which are done in the said language. And in October 2016, I became a student of ENCG-Agadir [National School of Management and Commerce in Agadir].
When embarking on this journey, I knew so little about Morocco. Except it was a different nation. And I confirm that is right so. A people different from my own, a land, unlike mine. An unknown culture, different languages spoken. It was overwhelming. But again, it presented the opportunity of meeting new people and learning new things. A chance to broaden my horizon and enlarge my social network through friendships and relationships, and the benefits of all these can hardly be overstated.
The ride has quite been amazing with all honesty. It’s been a couple of years here, and I have grown fond of the land and its inhabitants. Given my minimal knowledge about Morocco upon my arrival, it made it easy to learn once I touched here. From school to the outside community and neighbourhoods, interactions with friends and colleagues and with strangers alike. The F’tour during Ramadan with both local and other international friends at the beach and music and dance afterwards where I’m always chanted to do some “African” dance are cherished moments—forever in my heart. The conflict of interest where some of my mates in school want to improve their English and me, my French always leaves us with uncontrollable laughter.
As black as I am, I have never been confused for anything than a sub-Saharan African—which I am. [Except once, when a lad about my age mistook me for an American around the Marina in Agadir—kind of odd]. But for my actual nationality, people firstly assume I’m from Senegal or Côte d’Ivoire or Guinea or some other French-speaking country in the region. After several attempts, I usually burst out amid laughter that I’m from Ghana [as I try to always pronounce Ghana in Arabic with my funny accent even though most of my conversations do happen in French especially with strangers—vendors, taxi drivers, and random people around.]. Once my nationality is made known, the other person, mostly male, would usually [with a smile] shout “Abedi Pele!” or “Asamoah Gyan!” in attempt to show they know some Ghanaian football stars, which makes me proud, always. Or it may be “Accra!”—the capital.
I have only been to a few cities and regions in the Kingdom and the city Safi is by far, my favourite. With its cultural and modern appearance entangled with immense serenity and calmness, running up the mountains and down the valleys, I fall deeper in love with every trip. Regardless of my love for Safi, Agadir has my heart. My second home. Likewise, with mountains edging its frontiers, I’m reminded every time I look up to them about the potential I can still reach. With a stare down the valleys, I’m reminded of how far I have come. This makes my heart grateful.
I have, again, grown fond of Dar Si Hmad and all they do and stand for. Frankly, it’s been a month and a half, but I have learned a lot seeing the passion in the eyes of the team and their eagerness to work to achieve greatness with respect to their various projects and individually assigned task. My short time in Dar Si Hmad has taught me quite a lot, both professionally and personally beyond what I learn within the four walls of my school’s classrooms or auditoriums as I work as an intern under Mr. Abdellah El Moutaouif in the accounting and bookkeeping department. From financial record-keeping to making of bank reconciliation statements, from formal relations to informal conversations. The work environment has and is favourably amazing.
In a few days, my time here at DSH will be over, which is a bit sad but then again, I trip Safi in a week or two afterwards, so you can imagine the feeling is rather bittersweet!

I am particularly thankful for the people I met here in DSH. Mr. Abdellah El Moutaouif who supervised me as an intern, and for the many things he has selflessly and carefully taught me in my field of studies. Also, many thanks to Hafida and Tasnim who recently left, Khadija, Salwa, Soufian for the warm welcome gestures and chats from time to time. Likewise, it was great to have met interns like Walid, Katherine –who are gone by the way. Above all, I want to thank Dr. Jamila Bargach for this opportunity and the entire DSH staff.
Posted by Salwa El Haouti at 3:44 PM