Thanks to Environmental Youth Ambassador Mohamed Ouabbou for this guest blog post about the International Day of Rural Women! We are proud to be working with young Moroccan male feminists.

This post is part of our "Road to Marrakech" social media campaign leading up to COP22. The first Sustainable Development Goal we are highlighting is SDG 5: Gender Equality. From all of us at Dar Si Hmad, happy Rural Women's Day! 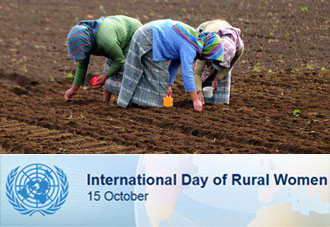 The first International Day of Rural Women was observed on October 15, 2008. The idea of honoring rural women with a special day was put forward at the Fourth World Conference on Women held in Beijing in 1995 - the same event where then-First Lady of the United States Hillary Clinton first declared "women's rights are human rights". It was suggested that this day be celebrated as World Rural Women’s Day.


The United Nations International Day of Rural Women celebrates and honors the role of rural women who make up one-quarter of the world's population. Rural women are often the primary providers of food and sustenance for their families and contribute to the majority of global food production by constantly adapting to their environments with new agricultural techniques. They do this while frequently working in situations of poverty - bearing in mind that 76 percent of the world's extreme poor live in rural areas.

Today's commemoration aims is to address the human rights of all rural women, improving their working conditions and recognizing the important role they play in society. This is a vital step in ensuring the sustainability of human-nature systems.


In Morocco, many women survive through subsistence farming with limited other opportunities available to them. Poor infrastructure and limited access to credit means that raising enough income to support children's schooling is made more difficult in female-headed households - creating a vicious cycle of poverty and poor education.


Since its founding in 2010, Dar Si Hmad works to support mothers to improve their livelihoods in Southwest Morocco's rural areas. The organization utilizes pioneering research and technology and uses education and ecology to promote intercultural exchange and participatory development facilitating sustainable growth for the region. Some of projects particularly relevant to the International Day of Rural Women are:
Two weeks ago, the above programs won a prestigious award from the United Nations Framework Convention on Climate Change (UNFCCC) in recognition of their support for rural women. Momentum for Change recognizes the transformative climate action projects that are already taking place on the ground. Momentum for Change is spearheaded by the UN Climate Change secretariat as part of wider efforts to mobilize action and ambition as national governments work toward implementing the Paris Climate Change Agreement and the Sustainable Development Goals. Dar Si Hmad won under the "Women for Results" focus area that showcases women-led initiatives addressing climate change. Our "Women-Led Fog Harvesting for a Resilient, Sustainable Ecosystem" is gaining international attention and more groups are exploring how they can borrow from our learning in fog-harvesting, environmental education, and women-centered rural development to improve their own work.

While today's celebrations focus on the specific situations of  rural women, it is important to also acknowledge the value of rural women to economic growth, food security, and people's empowerment. As former UN Secretary-General and Nobel Peace Prize Laureate Kofi Annan said, "When women thrive, all of society benefits."

Join Dar Si Hmad on Twitter, Instagram, and Facebook to learn more about how we are promoting and empowering rural women to help achieve the Sustainable Development Goals.
Posted by Dar Si Hmad at 8:00 AM