The Road Back Home, Evocation and Sentimentalism Through Sahraoui Poetry

As a Sahraoui woman, I was curious when I heard that a presentation about our poetry was being given at the Association Dar Si Hmad. Like many others, I have grown to ignore a lot of aspects of my own culture even if I still liked to consider myself as a proud Sahraoui woman. Yet, and after many years in the North, I felt a distancing from my community. In particular, poetry as a vital cultural asset was something unfamiliar to me and a part of my culture that I left unexplored.

The presentation was given by an American anthropologist as part of Dar Si Hmad’s Speaker Series, a program which invites national and international researchers to present on their academic fieldwork in Morocco. Dr. Tara Deubel, a cultural anthropologist and professor in the United States, conducted research about Sahraoui poetry, a world that was not familiar in the world where I was growing up as a child. 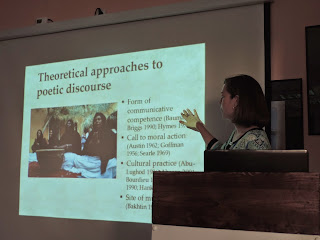 In her talk, Dr. Deubel went through a brief description of the anthropological research she conducted about poetry in particular, but which addressed the Sahraoui culture as a whole. Among different types, she mentioned the Hassani feminine poetry, the “Tebraâ,” which refers to intimate themes associated with women and related to love and flirtation. The everyday Hassani language is full of metaphors, analogies and symbols, making it quite difficult to decipher exactly what one is saying without the cultural familiarity and linguistic background.

For instance, the verse  أًلاَ يَكَــدَرْ يَنْعــــ لخضار فْعِيمان الجَفافْ  roughly means “who can insult greenness in drought years.” Here, greenness is not only about the color or the natural world, but suggests a man as well. Although this may not be clearly articulated, this is the very essence of the metaphor in which the poet appears to be talking about nature, when in fact the poet is referring to a man, a lover. 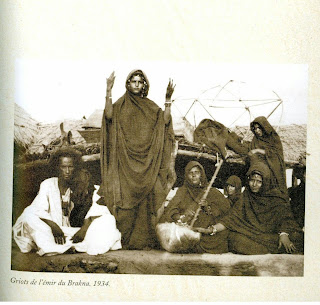 Dr. Deubel also gave an informative description of various genres that establish the rules for reciting poems. Such a thing requires a strong linguistic and academic background in Hassania itself. Since poetry and music have a strong presence in the Sahraoui culture, the researcher didn't miss to mention how rhythm and recitation have played a fundamental role in literature and gave examples of important poets and musical bands.To be able to carry out her study, Dr. Deubel, like all anthropologists, had to live for several months in the South of Morocco as well as Mauritania, experiencing the similarities and differences between these two lands. Traditionally, poetry in Sahara is transmitted through narratives and oral discourse. Thus, I can only imagine the complexities and challenges for a researcher to learn in a context which is absent of written references. It is impressive that Dr. Deubel managed to study poetry within a culture that is based on the memory of its inhabitants more than on written works.

I am aware that studying such topic requires anthropological training, linguistic and familiarity with the long-standing Hassania language and culture. However, I also believe that a major component for research is founded upon a strong sense of curiosity and interest, which Dr. Deubel clearly expressed in her fieldwork. 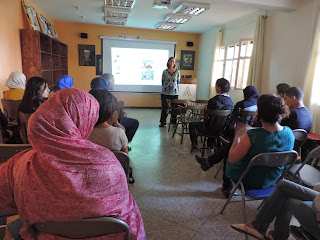 Finally, this presentation has touched me personally, emotionally and reopened my mind to a charming part of my culture and language that I had not explored. It sent me several days later to ask questions about the world I grew up in. 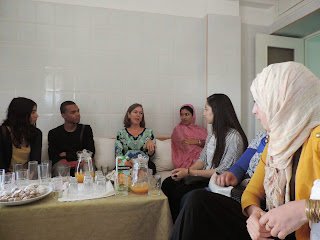