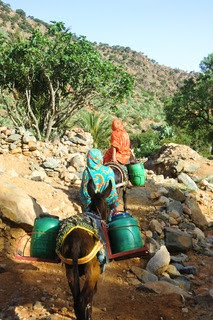 Lack of water is a problem that profoundly affects the quotidian of the villages located in the region of Aït Baamrane, and more particularly the lives of women and young women who spend a yearly average of three and a half hours per day fetching water.
La Laguna University in the Gran Canaria and the Derhem Foundation launched a project for the hydric evaluation of fog in this region in June 2006. After four and a half years of observation and measurements, they came up with extremely convincing results.

The results which were the second best on a worldwide level (10.5 Liters/ m2/ Day) made it clear to Dar Si Hmad that setting a fog-collection system ( collecting water from fog)  in the region is indispensable.
The fog-collection project in Sidi Ifni is a unique initiative in the north african region, whose success will inspire other organizations to follow Dar Si Hmad’s lead, and endeavor to provide drinking water in other semi-arid regions.
In 2012, Dar Si Hmad ascertained that the system is being built accordingly, setting up all necessary material (gutters, connections) to cover the 600 m2 nets area, burying around 6 Km of pipeline underground to link the system with the beneficiaries, and constructing more infrastructure associated with water distribution and storage (wells, tank, cistern and a fountain).

The project is drawing the media’s attention day after day, including national and international TV stations (Morocco: 2M, Germany: Pro7), national radio stations (Aswat, RTM) and made headline news on an international level.


As of April 2013, the system is almost in working order, and the water distribution is set for the summer season of 2013, giving hope for many women and girls, and opening many doors and opportunities for them.